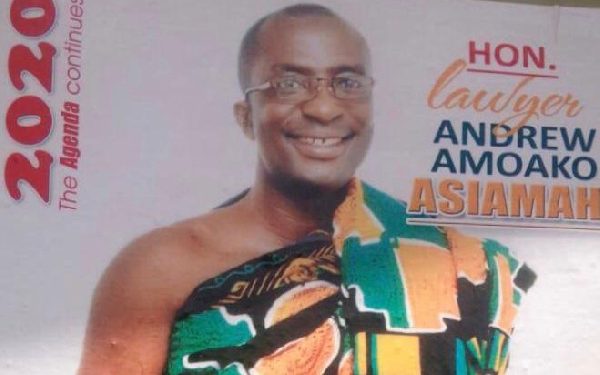 The decision of the Member of Parliament (MP) for Fomena, Andrew Amoako Asiamah to contest as an Independent candidate amounts to a vacation of his seat in Parliament.

This is according to Speaker of Parliament, Prof. Mike Oquaye.

On October 13th, 2020, the NPP wrote to the Speakerof Parliament to trigger the provisions of Article 97 (1)g for the seat in the house to be declared vacant.

The Speaker delivered his ruling on the request in parliament on Saturday just before the chairperson of the Electoral Commission addressed MPs on their state of preparedness for the 2020 polls.

“With all intents and purposes, he is no longer a member of the party. He has pronounced himself publicly as an independent and has filed his papers to compete against the party in his official candidate as an independent on 7th December 2020. Having forfeited the membership of the party on whose ticket he was elected, to parliament, the operative language of the constitution is that, he shall – which is mandatory – vacate his seat in Parliament”, he said on Saturday.

Andrew Amoako Asiamah withdrew from the NPP’s primaries citing machinations to get him out.

President Akufo-Addo has already said he cannot understand why the MP has refused to withdraw his independent bid after several attempts by the party leadership to stop him.

Andrew Amoako Asiamah lost in the party’s primaries held in June 2020. Being unhappy with the turnout of the election, he filed as an independent candidate in the December polls.

The party has since written to the Speaker of Parliament asking that the seat be declared vacant till a replacement is found after the December polls.

The NPP also said its members who decided to file nomination forms as independent parliamentary candidates automatically forfeited their membership of the party.

Already, President, Nana Akufo-Addo has impressed on the chiefs and people of Fomena in the Ashanti Region to persuade the MP, Andrew Amoako Asiamah to rescind his decision to contest as an independent candidate in the upcoming general elections.

He said Mr. Amoako Asiamah’s decision, if not rescinded, could deprive the people of Fomena of development.

Akufo-Addo, who is on a tour of the Ashanti Region told the chiefs of Adansi Traditional Area that he will primarily work with members of his party if he is reelected as President hence it will be in the best interest of the people of Fomena if Mr. Amoako Asiamah goes back on his decision to contest the parliamentary election as an independent candidate.

“You need to speak to him. The decision will not help him. It will also not help you. He will not profit from it and it will not be profitable to me, because I am an NPP member, and I work with NPP people. In future, by the grace of God when I still have the power, it is NPP people I will govern this country with,” he said.

The President said he will ensure that Mr. Amoako Asiamah is comfortable in his next government should he change his mind.

“If there is a problem, and he cannot be an MP, I appeal to him, he should put it behind him and let’s focus on the party. After the elections, whatever we need to do for him to be comfortable, I assure him, I will do it,” Akufo-Addo said.

The President said it is not too late for the Fomena MP to rescind his decision.

Related Topics:FORMENA MP
Up Next