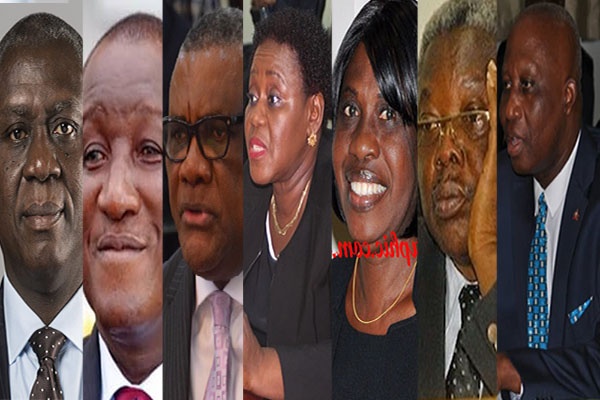 Many people, continue to express dismay and disappointment in the Supreme Court for dismissing the application from the petitioner to have access to the original documents from the Electoral Commission (EC) which declared incumbent President, Nana Akufo-Addo, as the winner of the 2020 Presidential Election.

One such individual, Marricke Kofi Gane, described the Supreme Court decision as a stab in the soul of justice.

The unity of purpose between the EC and President Akufo-Addo’s lawyers in arguing forcefully against making the documents available to the petitioner; ex-President John Mahama, has given weight to allegation by the National Democratic Congress (NDC) that Akufo-Addo’s victory is tainted by electoral fraud, and that the EC is hiding something.

From the disqualified independent presidential candidate, Marricke Kofi Gane to two private legal practitioners, Prof. Kwaku Azar and Kofi Bentil, have in separate instances disagreed with dismissal of the application by lawyers of the petitioner in the 2020 election, asking the court to instruct the EC to provide them with original copies of some documents.

This comes after a live microphone captured President Akufo-Addo’s lawyer running away from EC figures during the cross-examination of Mr Asiedu Nketiah which ended on Monday, February 1, 2021.

In a brief moment, Akoto Ampaw, is heard telling off a member of the legal team he is leading that the figures that the EC boss used to declare Akufo-Addo as President-elect, cannot be used to confront Johnson Asiedu Nketia, the key witness from the petitioner’s side.

“You can’t use EC figures to confront him, aaah!” he is heard blurting out in the video. A video snippet of his frustration has since gone viral on social media with many pointing out that the man is defending figures that he himself does not believe in.

Akoto Ampaw, had meant for his lack of confidence in the EC’s figures to only be whispered to his legal team member, but his microphone was on loud enough to amplify his confession to be heard.

Shortly after the ruling, Kofi Bentil wrote “I find it most perplexing and retrograde that a Public institution will insist on withholding public documents and information from citizens, especially when those documents are important in determining a case, adding “I think NDC should sue the EC under the Right to Information and obtain those documents. Ultimately I think the NDC won’t succeed, but this ruling is patently retrograde”.

To this Gabby Asare Ochtere responded “I’m perplexed by your post! They have all the documents. The Form 13 is Exhibit 4 attached to the respondent’s witness statement. Not sure what the controversy is”.

But Mr Bentil fired back with another post “the better approach to transparency and good governance is to make rulings that expand the frontiers of freedom of information; not to constrict it. This decision sets the fight for the right to information back!

Not long after Bentil who is also the Vice-President of policy think-tank “Right to Info. Includes right to info. you already have. For example, you may know your exam grades from your test papers, but you are entitled to request the official transcript information as many times as you wish and pay for it !!

Marricke Kofi Gane, had argued that it was in the interest of the judiciary, Ghanaians and the EC to have the original documents submitted for inspection, if there was nothing to hide.

Reacting to the ruling, Mr Gane pointed out that for the sake of transparency and integrity, the request should have been granted to quash all doubts surrounding the legitimacy of President Akufo-Addo.

He posted on Facebook saying: “This is very sad. It was in the interest of the Judiciary and ALL Ghana, that we quash all doubts about the EC’s transparency & integrity and the President’s legitimacy, by letting them show originals of their documents IF indeed they were wrought in integrity. We just stabbed the soul of our Freedom and Justice.#TheCaseIsDone”.

Kwaku Azar, who is also a professor of accounting in the US, asserted that the request if granted would have taken nothing from the EC. This he noted would have rather enhanced the reputation of the EC and further, add credibility to the declaration of the results.

“I disagreed with the Court in 2013 and do now. My reasoning is simple. Unless there is some privilege that is being asserted, all government documents should be discoverable,” he said.

Prof. Azar added that, “The EC loses nothing by making available to a petitioner any and all documents that the petitioner believes will help his case. I dare say such willingness to disclose information actually enhances the reputation of the EC and further adds credibility to its declaration.”

The Supreme Court led by Chief Justice Kwasi Anin-Yeboah on Wednesday unanimously dismissed an application by the petitioner to have the EC provide them with original documents used in the declaration of the results on grounds that the lawyers for the petitioner led by Mr Tsikata, failed to establish reasons why the application should be granted.

The motion, which was filed at the apex court Tuesday, is asking the apex court to grant the petitioner permission to inspect some documents of the EC.

Lawyer Tsikata, had argued that the request would be in the interest of the EC to provide the documents if they had nothing to hide, adding it would ensure transparency and credibility but the 1st and 2nd respondents opposed saying the petitioner already had these documents.

The court in its ruling, said the petitioner failed to demonstrate that he had no copies of the documents in question.

The court said the witnesses of the petitioner admitted on oath of having copies of the documents.

The chair of the panel Chief Justice Anin-Yeboah, said the application and whether it would be granted was subject to the discretion of the court and not as of rights.

He added the application, did not also raise that it had no copies of the original documents.

“In the instant case, the applicant has not raised any issue that he has no copies of the documents of the subject of this application. In view of the fact that the proceedings show the petitioner has copies of all the documents the subject of this application. We are of the opinion that no proper case has been made to warrant the exercise of our discretion in favour of the applicant.”

But Kweku Azar, declared he will support any move to have the court revise its decision and instruct the EC to provide the documents.

“I will support a revision of the Court’s rules to compel the EC, and other public agencies, to disclose documents in their custody to those who challenge their decisions,” adding “anyone who will want these disclosures as a petitioner should support this move. We must avoid taking positions based on where we stand.”

“The EC loses nothing by making available to a petitioner any and all documents that the petitioner believes will help his case. I dare say such willingness to disclose information actually enhances the reputation of the EC and further adds credibility to its declaration.

“Some have said that if you have copies of bank deposit slips then that should be enough if you have a dispute with the bank on your actual balance, where the bank claims to use the same slip but has provided multiple balances. I demur. A customer is entitled to know why the bank gets different balances.

Discovery should let the parties learn about their adversaries’ evidence to give them time to obtain challenging evidence.

The government and its agencies have an even higher duty of disclosure. The Court agreeing to televise the proceedings is the Court’s way of communicating to the public that it has nothing to hide.

I will support a revision of the Court’s rules to compel the EC, and other public agencies, to disclose documents in their custody to those who challenge their decisions.

Anyone who will want these disclosures as a petitioner should support this move. We must avoid taking positions based on where we stand.

The Speaker is right in complaining about the President’s failure to consult Parliament in the appointment of certain categories of Council of State members.

By the same token, the Speaker should also complain about why #SALL citizens are not represented in Parliament.

It is not “on” for the Speaker to complain about the lack of consultation while failing to take notice of SALL’s unprecedented and unlawful disenfranchisement.Da Yie!