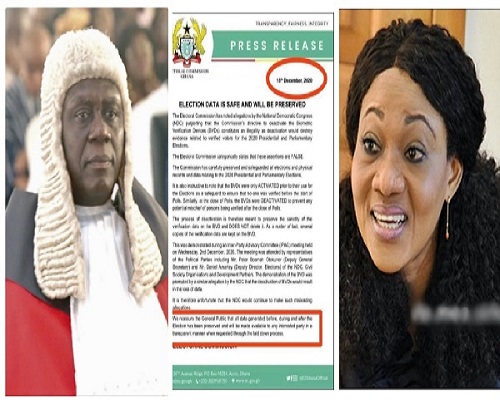 The discretionary powers clothed with the Supreme Court of Ghana, has once again unanimously favoured the Electoral Commission (EC) and President Nana Akufo-Addo during today’s hearing of the election petition.

Several decisions of the apex court with respect to the discretionary powers, have gone in favour of the two respondents in the case; the EC boss Jean Adukwei Mensa and President Akufo-Addo, after applications and arguments by the petitioner, John Mahama.

Also dismissed was a motion for leave to add additional grounds and amend a paragraph in the petitioner’s motion for review relative to the interrogatories.

Additionally, the same Supreme Court unanimously dismissed a review on motion for interrogatories even with the addition of new panelists Justice Henrietta Mensah Bonsu and Justice Yussif Tanko.

The latest application, a motion to inspect original documents in the custody of the EC, was also unanimously dismissed by the Supreme Court.

Interestingly, the EC shortly after the 2020 elections declared in a press statement dated December 18, 2020 that “We reassure the General Public that all data generated before, during and after the election has been preserved and will be made available to any interested party in a transparent manner when requested through the laid down process”.

During the hearing, the lead lawyer for the petitioner, Tsatsu Tsikata, argued that his client was entitled to inspect the documents of the 1st Respondent due to the differences in the number of total valid votes cast and other results in the declared results.

He insisted that inspection of the said documents, will enable the petitioner to confirm whether their documents are the same as those in the custody of the 1st Respondent, the Electoral Commission.

But the application was objected to by lawyers of the respondents.

They described the application as misconceived.

The lawyer for the 1st Respondent, argued that the petitioner has all carbonated copies of the said documents, hence such a request was untenable.

Also, the lead counsel for the 2nd Respondent, Akoto Ampaw, objected to the application, saying the burden of proof is on the petitioner and that he cannot use the backdoor to adduce evidence from the respondents.

Akoto Ampaw, further argued that the timing of the application and the failure of the petitioner to produce documents and evidence of his own denies him the right to the application.

The apex court led by Chief Justice Anin-Yeboah in its ruling on the application dismissed the same saying the threshold of necessity has not been met by lawyers of John Mahama.

According to the judges, the rule permits the EC to give the applied documents to the parties who participated in the presidential elections through their accredited agents. Indeed, regulation 47 of C.I.127 sub-rule 7 to 11 exclusively sets out the different forms to be completed at the various stages at the electoral process and copies of same given to the accredited agents of each candidate.

The application for discovery of documents requires the discretion of the court and the guiding principle.

In all cases in which the court makes an order for discovery, it is a matter of discretion and not as of right.

In an ordinary way, where there are issues of fact between the parties, the court will generally make such an order.

However, in the instant case, the applicant has not raised any issue that he has no copies of the documents of the subject of this application.

In view of the fact that the proceeding so far, shows the petitioner has copies of all the documents, the subject of this application, we are of the opinion that no proper case has been made before us to warrant the exercise of our discretion in favour of the applicant.

Order 21, rule 1 of C.I.97 which is the basis of this application, is not to be read in isolation and should be read in conjunction with rule 11 with the said order, which states that an order for the production of any document for inspection by the parties or to the court shall not be made under any of these rules unless the court is of the opinion that the order is necessary, either to dispose fairly of the course of the matter or to save cost.

Furthermore, section 166 of the Evidence Act RCD 233 of 1975, makes it clear that a duplicate of a document is admissible to the extent of the original, unless a genuine question is raised as to the authenticity of the duplicate.

No issue has been raised against the duplicate in possession of the applicant.

The discrepancies which the learned counsel for the petitioner has alluded to in his submissions with the declaration of December 9, 2020 and the press release of the December 10, 2020 and the answer in the witness statement of the 1st respondent are issues of evidence and do not give course for discoveries of the documents under consideration.

So for the above reasons, the application is dismissed”.

Related Topics:ECsupreme court
Up Next

SC ruling: Petitioner suffered a major blow when his application for inspection was dismissed – Lawyer

Salary Of Ministers In Ghana