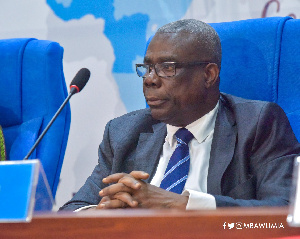 A video of the New Patriotic Party’s Campaign Chairman for the 2020 general elections, Peter MacManu, which has resurfaced, seems to suggest some iota of truth in claims made by witnesses for the petitioner, in the ongoing election petition hearing at the Supreme Court.

One of the contentious portions of the petitioner’s witness statement claims that the electoral agents of John Dramani Mahama were sent out of the Electoral Commission‘s strong room, moments before the declaration of the 2020 presidential election results.

The statement by Rojo Mettle Nunoo, corroborated by Dr. Kpessa-Whyte indicates that the two who were representing the National Democratic Congress were asked by the EC Commissioner, Jean Mensa to deliver a message to Mr. John Dramani Mahama.

The witnesses, however, aver that the Commissioner’s ploy was to send them out and use the opportunity to declare the results in favour of President Nana Addo Dankwa Akufo-Addo.

They state, as part of their defense, that they never intended to abandon their post as has been suggested by the counsel for the respondents, but left in good faith, having been asked by the EC head herself and that accounted for them leaving their laptops and bags at the strong room.

However, during cross-examination, lawyer for the Electoral Commission, Justin Amenuvor put it to Dr Kpessa-Whyte that he and his colleague only left the Strong Room because they realized their candidate had lost.

The witness in his response said they only left because they were instructed by the EC Chair.

The truth about whether the two left their belongings in the EC Strong Room or not may have been confirmed by the National Campaign Manager of the NPP, Peter MacManu in an interview he granted to Paul Adom Otchere in the aftermath of the declaration of the 2020 presidential election result.

“There is a narrative that came out, Rojo Mettle Nunoo and Kpessa-Whyte say that there were given information to go and give to President Mahama. When they left then you guys put yourself together led by Jean Mensa and you went to do the declaration,” Paul told the NPP Campaign Manager before asking him to chronicle events leading to the result declaration.

In his narrative, Mr MacManu confirmed that Rojo Mettle Nunoo and Dr Kpessa-Whyte both left the Strong Room some moments before the declaration and that they indeed went out leaving behind their belongings.

“They left because I remember former Ghana’s Ambassador to Zimbabwe, Sylvanus Tamaklo came looking for them but specifically he was looking for Rojo. So, he stood there and I told him that they just went out, I think they will come because their laptops are here,” he narrated.

Mr MacManu, however, indicated that with his experience in election monitoring it was not surprising that the two had left before the declaration because it is something that frustrated agents of losing candidates usually did.

“Let me tell you a story, we went to IPAC, the CI 127 says that at the National Collation Center, not more than 2 agents of political candidates should be allowed.

“Then the NDC representative said that the two is small so let’s make it six. Then I said my fried be careful, the six you are asking for, because by the time we finish certifying the result and the declaration is to be made many of you would have run away……. every four years I am in the collation center. Some people get tired and when they realize that they are losing they run away,” he stated.

Mr MacManu, however, went ahead to say that Nana Addo Dankwa Akufo-Addo had firmly won the 2020 presidential election and that he for one was very ready at the time to face any petition or dispute that would be filed at the Supreme Court.

The NDC flagbearer for the 2020 Presidential Election, John Dramani Mahama is currently challenging the results at the Supreme Court.

According to the former President’s case, the result according to the declaration made by Madam Jean Mensah on December 9, 2020, had none of the presidential candidates polling more than 50% of the total valid votes as mandated by the constitution.

He is therefore praying the court to cause a rerun of the election between himself and President Nana Addo Dankwa Akufo-Addo.

Skip to 1:00:00 of the below to listen to Mr MacManu narrate incidents leading to the result declaration: