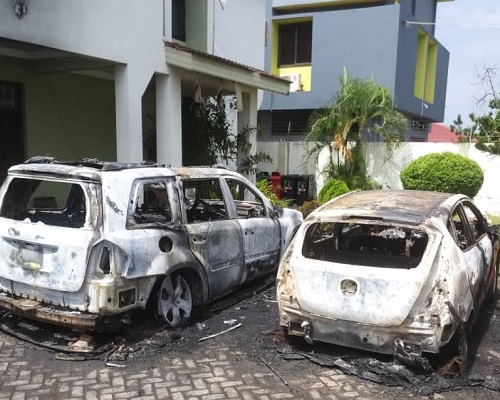 According to an Aide and media Coordinator of the NDC candidate, David Dartey, the vehicles involved including a Hyndai i30 and Mercedes Benz GL 45 4matic that have all been burnt beyond recognition at Tema Community 6 and 10 residential area.

“It happened around 3am today Sunday, November 8, 2020. It was Benz 4matic and Hyundai i30.  It was the Benz that started burning from the booth”, h revealed to MyNewsGh.com.

He indicated that he heard an explosion but when he came out, he saw that the Mercedes Benz vehicle was already in flames which compelled him to shut the main door and draw the attention of the candidate.

“When I heard the explosion I came out. I could see flames and I thought it was from the porch but when opened the door leading to the porch, the density of the fumes forced me to close it. I realized the car was burning so I had to rush to her room and alert her of the incident”, he stressed.