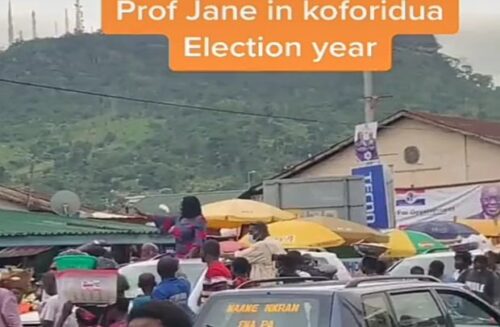 The township of Koforidua in the Eastern Region was virtually nonchalant towards Professor Jane Naana Opoku Agyemang, the running mate to the NDC flagbearer for the upcoming general elections John Mahama as she toured the town on her campaign trail.

A video going viral on various social media platforms shows a crestfallen Jane Naana Opoku Agyemang waving towards a virtually empty street at the heart of Koforidua, the capital of the Eastern Region.

The Koforidua township is known for its rock-solid allegiance to the ruling New Patriotic Party (NPP) and that was perhaps the signal to the NDC that it stood no chance in the town.

It would be remembered that same thing happened to the NDC presidential running mate during her campaign tour in Axim in the Western Region weeks ago.

In contrast to the episodes in Axim and Koforidua, Professor Jane Naana Opoku Agyemang has had rousing welcome in most of the towns she had visited on her campaign tour.

As her entourage snailed through the Koforidua town, the NDC running mate who was standing through the top window of her V8 Vehicle, making the change signal with her hands to the residents, but the residents could not be bothered.

Video Player
Related Topics:Koforidua
Up Next