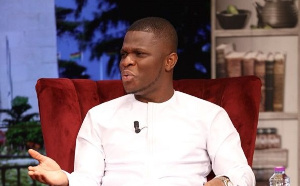 According to him, he never liked the NPP while growing because they loved to undermine and discriminate which is their way of politicking.

He mentioned that while at the Kwame Nkrumah University of Science and Technology (KNUST) as a fresh student, he tried to weigh both sides of the political divide and realized the New Patriotic Party(NPP) was discriminatory and never allowed for people without “big name” backing the opportunity to excel.

Speaking on Accra-Based Neat Fm monitored by MyNewsGh.com, he indicated that after reading about the NDC and the fact that the party was welcoming made him choose to be a member of that party and has never regretted his decision to join the NDC.

He argued if he was a member of the NPP, he will never have risen as fast as he has because the NPP does not give the opportunity to the youth to explore and display their innate abilities.