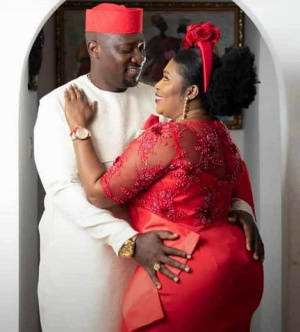 The announcement of the union between Chief Hamilton Biney, the Deputy National Organiser of the opposition National Democratic Congress (NDC) and Afia Akoto, the Deputy Chief Executive of Microfinance and Small Loans Centre (MASLOC), has birthed heated debate between party loyalists.

Whiles many Ghanaians are excited about the couple, some members of the NDC are calling for the resignation of their Deputy National Organiser.

One of such critics, is Stephen Atubiga, a sympathizer of the opposition party.

He admonished that the NDC must ban Chief Biney from sitting in very sensitive meetings, this he explained is because politics and love cannot mix.

“The heartbeat, strength, and strategy of winning 2020 or election for NDC, is in the hands of the national organizer and his deputies. There is no room for family, love or stomach when leading us (NDC) as a national executive for (war) elections while wining and dining with our opponents ( enemies). The party is very naked now my people,” He wrote.

Whiles the debate is still ongoing, NPP Bono Regional Chairman, Kwame Baffoe aka Abronye DC has muddied the waters with his utterances.

Speaking in an interview on Net2 TV, monitored by www.ghanaWeb.com, he explained why the NDC man chose a woman from the opposition party.

“You know Chief Biney is an auctioneer. Anytime he takes the NDC ladies home, they rob him but Maame Afia Akoto is not like that, that’s why he wants to marry her… Some of the NDC women are pickpockets. NPP women are not like that.”