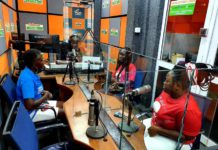 Four years after they were attacked during a house-to-house campaign at Suhum in the Eastern Region, Loyal Ladies of the New Patriotic Party (NPP) are set to hit the streets of Suhum to commemorate the attack.

It was reported in 2016 that some irate youth, suspected to be members of the then governing National Democratic Congress (NDC), on Tuesday night (October 11, 2016) attacked the group during a house-to-house campaign at Suhum.

The guards were alleged to have confronted the ladies on grounds of campaigning for the party’s flag bearer, Nana Akufo-Addo, and the NPP parliamentary aspirant there, as well as other unprintable allegations.

It resulted in an argument and the guards ended up beating the ladies.

However, telling their side of the story after four years, the ladies said they were not treated well by the supporters of the NDC all in the name of doing politics.

Therefore, it would be in place to commemorate that day for Ghanaians to know they didn’t deserve what they went through.

“We still remember what we went through four years ago. The pains in the hands of these NDC men all in the name of campaigning and so we are set to hit the street and commemorate the day and tell our story to Ghanaians,” she said.

Miss Arthur said they will march across the streets of Suhum on Wednesday to tell their story and later converge at the Suhum lorry station to organise a mini rally and preach the good works of the NPP government.

She added their move is also to encourage women and tell them they have the right to do what they want as far as politics is concerned without intimidation.

NPP kicks out Fomena MP, writes to Parliament to seek his expulsion