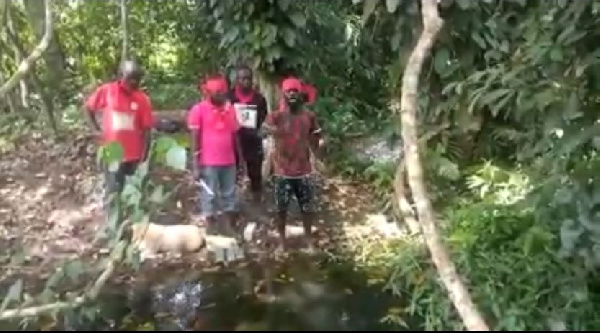 The renomination of Samuel Addai Agyekum as District Chief Executive for Sekyere Kumawu has led to the invocation of curses on some leading New Patriotic Party members by some youth in the area.

In a video sighted by GhanaWeb, the group numbering about four were breaking eggs, slaughtering a sheep, and pouring libation in a stream.

The group mentioning the Ashanti Regional Minister, a Council of State Member and the New Patriotic Party Chairman for Ashanti Region, Bernard Antwi Boasiako, called on certain gods to deal with them if any dares interfere in the confirmation process of the nominee.

Already, the former DCE renominated by President Nana Addo Dankwa Akufo-Addo has failed to secure a two-thirds majority of votes in two sessions of voting for his confirmation.

The group of young men seen in the video accused Mr Addai Agyekum of stifling development in the area while in office and also schemed to reduce the votes of the NPP before the 2020 polls by supporting an independent candidate with his resources and thus vowed to ensure his rejection by members of the Kumawu District Assembly.

This new development comes barely a week after a pro-NPP group identifying itself as Concerned Youth of Sekyere Kumawu shared similar concerns.

“The DCE sought to use his office to create divisions within the grassroots in the Constituency…During his term as DCE, development came to a standstill and this will affect the party in its quest to ‘break the eight’ going forward,” the convener of the group said.