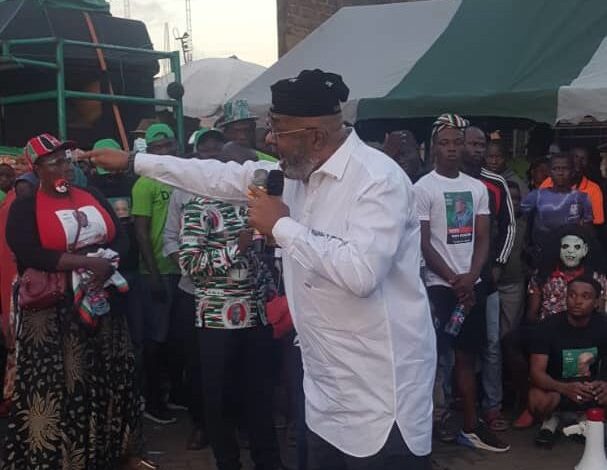 Alhaji Said Sinare has urged National Democratic Congress (NDC) supporters, floating voters, sympathisers to come out in their numbers on December 7, 2020, to vote for the opposition NDC to ensure a one-touch victory for the country to be rescued from the wrong hands.

He expressed the belief that God would give the NDC victory in the election, and said it was left with the NDC supporters, floating voters and sympathisers to go out and cast their vote to guarantee the victory this country needs to be rescued from the Akyeam Sakawa Boys.

Alhaji Said Sinare, who is the former Ambassador to Saudi Arabia and the current National Vice Chairman of the opposition NDC, made the call at a rally in Nima in the Greater Accra Region yesterday as scores of Ghanaians were seen shouting we need Mahama, “we need to change the change”.

The supporters and Nima residents echoed his new hawusa slogan and danced to the party’s songs and you can see how thousands of them are truly angry for Change.

Speaking at the event, Mr. Sinare noted that it is important for NDC supporters, sympathizers and floating Voters to make sure they exercise their franchise before travelling because the country needs to be recued.

The furious National Vice Chairman of the Ndc, Alhaji Said Sinare noted that the Akufo-Addo government while in opposition labelled the erstwhile NDC/ Mahama administration as corrupt, and asked Ghanaians to vote against the National Democratic Congress (NDC), however, after assuming power, the New Patriotic Party (NPP) administration has shown that it is deeply rooted in corruption than any other Political party that has existed in the Fourth Republic.

Citing the recent Agyapa agreement Brouhaha, Missing excavators, the Cash for seat and suspension of electricity distribution company, PDS that involves high
government officials, the National Vice Chairman of the NDC again observed that the government was rather an accomplice in the scandal rather than a victim.
He also continue to add that, president Akuffo Addo must be made ambassador in corruption.

“The figures they keep mentioning today are not the reality on the ground and if they care to know, I would like to tell you and the whole NPP that,

2. In 2016, petrol/diesel sold for 14 Cedis a gallon in less than 4 years under President Akufo Addo the same gallon is selling for about 28 Cedis today. Kerosene prices equally increased by same margins.

3. In 2016, the Ghanaian filled a 15Kg LPG cylinder for less than 40 Cedis but today under President Akufo Addo in less than 4 years you need 100 Cedis and above to fill the same 15Kg cylinder.

4. In 2016, the cedi traded for about 3.8 to the dollar, today in less than 4 years you need almost 6.00 Cedis to get one dollar. It is sad to note that for the first time in the history of our dear country, our beloved cedi has been rated by Bloomberg as the cheapest currency in the world. What that means is we have failed where others have succeeded. This issue is so serious to the extent that the government has to set up a Committee to without Bawumia who parades himself as a economic Messiah to investigate the poor performance of our cedi

6. Ghanaians are paying more for electricity today than they did in 2016.

7. Ghanaians are paying more for spare parts today than they did in 2016 even though we are told duties on spare parts have been reduced drastically.

8. Ghanaians are paying more for every good and service they consume today than they did in 2016 under President Mahama.
I keep saying all these for Nana Addo and Bawumia to wake up because these are not their promises prior to the 2016 election, he emphasized.”

“My people, the worse of it all is that, They are the first people to Borrow everything including we Ghanaians without having even a gutter to show for the monies they borrowed”

Related Topics:ELECTION 2020
Up Next

You’re struggling yet Nana Addo’s chair is carried around with 3 V8 cars, 7people – Elikem to NPP