struc What Nation is Akufo-Addo going to hand over to me? – Mahama speaks about violence - Home Of Ghana News 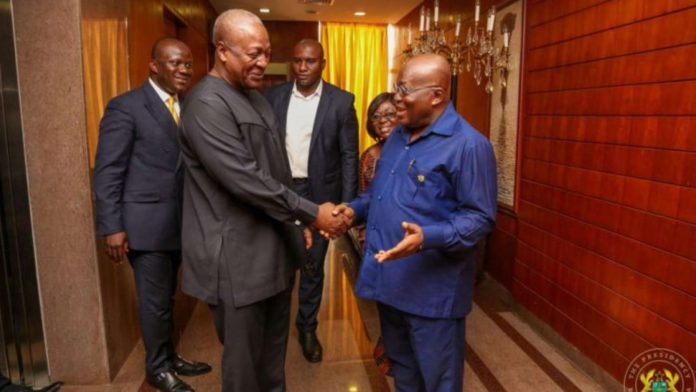 The Flagbearer of the National Democratic Congress, John Dramani Mahama, has questioned the kind of nation he would inherit from the ruling Akufo-Addo-led government, considering the kind of violent-related incidents that have been witnessed under his government.

Comparing governments under the fourth republic and the peaceful nation they handed over to their respective successors, he wondered, if same could be said about the incumbent government when the time comes for them to hand over power.

He described Akufo-Addo’s style of governance as tyrannical and dictatorial. Addressing the media at Bole in the Savanah Region after acquiring his voters identification card, the former president, John Dramani Mahama said,

“President Rawlings was the first president under the Fourth Republic. He ruled this country for eight years and handed over peacefully to President Kufour, President Kufour was in power for eight years and he handed over the peaceful and united country to the late Professor Evans Atta Mills and I took over in 2012 after the unfortunate passing over of Professor Mills. I handed over a peaceful and united country to Akufo-Addo. Unfortunately, what nation is Akufo-Addo going to handover to me when I take over from him in 2021?” he quizzed

He also accused, the president of being determined to do everything possible to remain in power, this, he says Ghanaians ought to vote against.

“The Akufo-Addo government is trampling our democracy. A lot of things that are happening; closure of radio stations and just recently during this registration exercise the elimination of people and the questioning of their citizenship and the use of the military to prevent people from registering. It all shows a government that is determined to do everything to hang on to power.”

We will bring back the peace and unity in this country. We will make all our people feel they belong to this country and that some people do not own this country than others,” he said.

Related Topics:MAHAMA INTERVIEW
Up Next