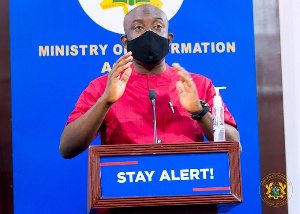 Kojo Oppong Nkrumah, a Spokesperson for President Nana Addo Dankwa Akufo-Addo in the 2020 Presidential Election Petition trial on Tuesday questioned the reasons behind Mr Robert Joseph Mettle-Nunoo not been used as a witness by the petitioner, John Dramani Mahama.

He said Mr Mettle-Nunoo should have mounted the witness box, take the oath and tell the court that he spoke with Mrs Jean Mensa, the Chairperson of the Electoral Commission and was instructed to leave the EC Strong room.

Earlier, Dr Michael Kpessa-Whyte, the Second witness of the Petitioner, former President John Dramani Mahama, in a cross-examination told the Supreme Court that Mrs Mensa instructed him and Mettle-Nunoo to convey a message to the petitioner and then declared the results on their absence.

Mr Nkrumah said lawyers for the Respondent believe that “if Mettle-Nunoo had mounted the witness box, the court would have caught him for perjury, because he could not take an oath and tell untruth”.

According Mr Nkrumah “this is the reason why Petitioner have resorted to use Dr Kpessa-Whyte, who now admits that he never spoke to the Chairperson and yet she was a subject to an instruction, but the one who heard the instruction was available and alive, but refuses to mount the witness box”.

He said three key issues have been settled in their opinion which were the fallacy that was initially expressed and amplified through Dr Kpessa-Whyte that the Chairperson of the EC instructed them.

“We are beginning to see clearly that, that fallacy at best is something that could not stand cross-examination,” he said.

He said it was not just the interchange of words like instruction, but what “we want the media to take particular notice of are that there is nowhere in the witness statement that instruction was used but rather it was “asked” that was used”.

He said now in the witness box and under oath, the witness seeks to amend that and to escalate the claim that they were instructed and that was why the lead Counsel, Mr Akoto Ampaw for President Nana Akufo-Addo (Second Respondent) did not take too much time in his cross-examination.

He said they were clear in their minds that the fallacy has been settled and the court would take juridical notice, and that it could not even be true that the Chairperson of the EC would instruct a representative of a Candidate and they would obey.

He said they think that it was becoming very clear that these matters were settled and connected to the Principal issue; ‘did anyone get more than 50 per cent, was the declaration in breach of article 63 (3), this key questions would now be answered’.

Mr Nkrumah said another matter that sought attention was the FORM 13, there was a claim to suggest that, the document that was shown to the witness was done through the backdoor and was not FORM 13.

The Spokesperson said the claim that the witness has been harassed by the Bench (Judges) was a tactics being used by the lawyers for the Petitioner to poison the minds of Ghanaian against the bench, because they could begin to see through the questions and answers that they were giving gaps in their case.

“The Bench has the right to ask questions for clarity and we believe that when our witnesses get to the box, they will also be ask questions and there is nothing wrong with that,” he added.

Meanwhile, lawyers of the Petitioner has filed a motion at the Supreme Court seeking an order to inspect documents from the Electoral Commission.

The motion on notice was expected to be moved Tuesday, concerns some original documents regarding Presidential Results Collation Forms.

The six point-motion is asking for the originals of all Constituency Presidential Election Results Collation Forms and Summary Sheets of all constituencies in Ghana.

Related Topics:KOJO OPPONG NKRUMAH
Up Next