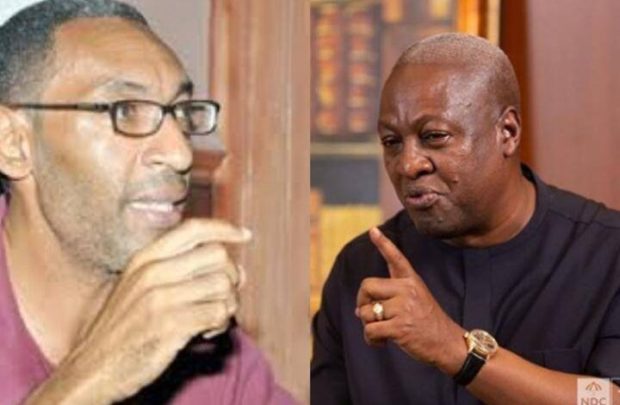 Last son of Ghana’s first President, Sekou Nkrumah has gone hard on the flagbearer of the National Democratic Congress (NDC) warning him not to ever use his father’s name for his campaigns.

Sekou who is known to be a strong critique of the opposition National Democratic Congress (NDC) sent out the warning through his social media pages yesterday during the celebration of Kwame Nkrumah Memorial Day.

The former president and flagbearer of the National Democratic Congress (NDC) yesterday paid homeage to the Osagyefo as the country marked the Kwame Nkrumah Memorial day where he saluted the first president calling him “an iconic figure in the independence struggle and the liberation of many African countries.”

“Monday 21st September marks the birthday of Ghana’s Founder and first President, Osagyefo Dr. Kwame Nkrumah. He was an iconic figure in the independence struggle and the liberation of many African countries.
Dr. Kwame Nkrumah was an inspiration to many countries around the world. On this day, I want to salute him for his tireless and monumental contribution to our nation’s history.”

Dr. Sekou Nkrumah, who seemed not enthused about the message of the former president lashed out at him on social media and warned him not to use his father’s name for his political campaigns.
He added that there was no amount of political propaganda that was going to make Ghanaians bring back the NDC since Ghanaians are not fools.

“Please someone should tell Mahama not to use Kwame Nkrumah’s name on his campaign. Our first President has nothing to do with NDC.

Ghanaians are not fools, no amount of lies or propaganda can make them change their minds just four years after voting Mahama out.

I think it should be made clear to the NDC that nothing can make them win power under the leadership of Mahama. He was president before and did not perform, his government was corrupt and incompetent!,” he said.

Cashew farmers will be prosperous under my gov’t – Mahama