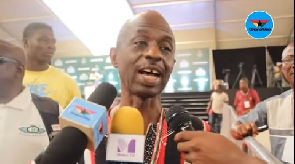 You made our primaries peaceful despite initial skepticism – NDC commends Police

The National Democratic Congress (NDC) has commended the Ghana Police Service for ensuring that last Saturday’s presidential primaries were peaceful.

It would also be recalled that the NDC questioned the integrity of the police service, after accusing them of poorly superintending over the shooting incident during the January 31 Ayawaso West Wougon by-election.

But, General Secretary of the NDC, Johnson Asiedu Nketsia said despite the party’s initial skepticism, officers deployed on the election day appropriately conducted themselves.

“We also handed over the security aspect of the election to the Ghana Police Service and we indicated to them that we are not so sure whether they were going to deliver because of the history we have on what happened at the Ayawaso West Wuogon where there were infiltrators; so we checked mate each. And so, we want to pat them on their backs and I hope that nothing is orchestrated to divert this important victory.”

In what has been described as successful elections, the NDC elected a presidential candidate to represent the party in the 2020 general election on Saturday.

Almost 280,000 delegates cast their ballot in the election which took place in all the constituencies nationwide under the supervision of the Electoral Commission.

Seven individuals battled it out in the polls that saw Former President Mahama come out victorious with an overwhelming 95.23 percent of valid votes cast.

Let’s trust each other and eschew divisions – Mahama to NDC

Presidential candidate-elect of the opposition National Democratic Congress (NDC), John Dramani Mahama has admonished members of the party to trust each other to ensure unity prevails amongst them.

He also urged the party members to eschew any act that tends to create divisions in the NDC.

“It is my hope that we will work together and eschew all attempts to divide us. Let us trust each other and let us not believe the kind of stories we circulated creating an impression that we are against each other,” he added.

He dedicated the victory to members of the NDC and their executives for working assiduously with the aim of bringing the party back to power.

“I will work closely with all of you so that our common objective of returning to power would be achieved. I salute all our executives,” he said.