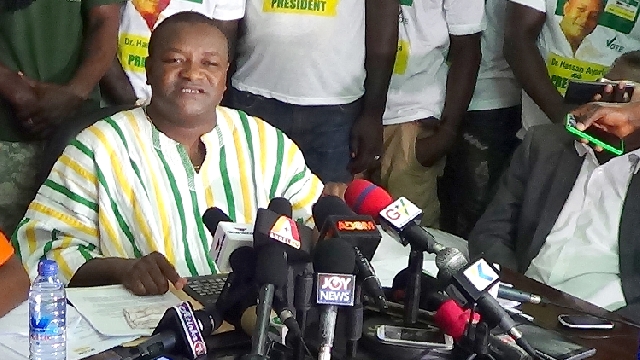 The founder of the All People’s Congress (APC), Hassan Ayariga, has rated the New Patriotic Party (NPP) government 37 per cent as far as its performance is concerned.

According to Mr Ayariga, the current administration has failed on almost all the promises it made to Ghanaians prior to the 2016 general elections.

The promises that have been fulfilled, such as the Free Senior High School (SHS) policy, he said, are also, in Mr Ayariga’s view, being poorly implemented.

To him, the government has failed Ghanaians.

Mr Ayariga said this in reaction to claims by Vice-President Mahamadu Bawumia that the NPP government has delivered 78 per cent of its promise.

Dr Bawumia declared this when he addressed participants at the Government Townhall Meeting and Results Fair in Kumasi, Ashanti Region, on Tuesday, 11 February 2020.

Taking the audience through the challenges the nation faced when the Akufo-Addo administration took office, including declining economic growth, high inflation rate, high-interest rates, high fiscal deficit, a weak and collapsing financial system, high unemployment, a health insurance scheme on the verge of collapse, four years of dumsor with its costs, and many parents unable to afford school fees for their children, Dr Bawumia said the NPP government had faced the challenges head-on and had delivered 78% of its manifesto promises.

“Notwithstanding the difficult economy we inherited, we had to get on with it and start to fix the problems. We were cognisant of our many promises. In fact, at the direction of President Akufo-Addo, we put together a dashboard of manifesto promises immediately after we were declared winners of the 2016 election, and before we were sworn into office. We have been using this dashboard to track our manifesto promises since”, the Vice-President revealed.

“The challenge was huge. How could an economy that could not pay even teacher and nursing training allowances, suddenly deliver lower taxes, restore teacher and nursing training allowances, create jobs, implement free senior high school education, NABCo, Planting for Food and Jobs, One Village-One Dam, One Constituency-One Ambulance, reduce electricity prices, formalise the economy, industrialising the economy, reducing the cost of doing business, etc., while at the same time reducing the budget deficit and the rate of borrowing? It seemed an impossible task and our opponents were emphatic that we could not fulfill our promises. But we were very confident that with good economic management and by the grace of God, we could make what seemed impossible possible.

“The data and the evidence are clear that we have largely met our manifesto promises. We have delivered and are delivering on over 300 of our promises, and we are on course to do even more,” he declared.

But speaking on Dwabirem on CTV hosted by Appiah Kubi on Wednesday, 12 February 2020, Mr Ayariga called on Dr Bawumia to stop making public pronouncement on the achievements of the NPP because, in his view, the government has performed badly.

“Dr Bawumia is a good brother but he should stop talking because he is disgracing himself. No intellectual takes him seriously, those intellectuals have all abandoned him because he doesn’t speak the fact. Pick the free SHS programme, this is a good policy but badly implemented by the government and they want us to clap for them,” he added.

Minority to boycott State of the Nation address over Common Fund