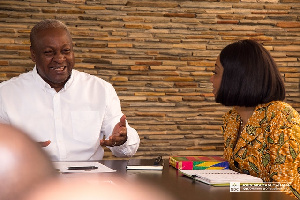 Former President John Dramani Mahama has lashed out at the Electoral Commission (EC) over challenges facing the voter’s register exhibition.

The EC is currently exhibiting the voter’s register ahead of the December polls. The exercise is fraught with several complaints as voters complain of their missing names among others.

There is also an allegation of the printing of new voter’s ID cards although the EC has denied the rumour.

Speaking during his campaign in the Bono Region on Tuesday, 22 September 2020, Mr Mahama announced he is suspending his campaign over the numerous complaints to return to Accra.

“Your incompetence is legendary. There is so much chaos and disorder and it has a potential to create chaos in this country. We are not confident in the process that is going on. There is too much anarchy and disorder,” the former president stressed.

He announced: “I am cutting short my tour of the Bono Region to return to Accra because of the increasing reports of challenges with the voter register and the exhibition process.”

He added: “We’ll address a major press conference on the issues in due course.”

Meanwhile, the Electoral Commission (EC) of Ghana has denied claims that it is printing new voter ID cards at its offices.

This is in response to a video being circulated online which captures some officials of the Commission reportedly printing new voter ID.

In a statement, however, the EC described the said report as “false” and “misleading”.

“During the just-ended Registration Exercise, few centers experienced the production of duplicate ID cards which resulted from registration kits bearing the same codes.

“As such the cards in the video belong to those persons with duplicate voter ID numbers. They were authorized by the Commission, printed at the Headquarters, and subsequently sent to the District Offices for lamination and distribution”, the EC clarified in the statement.

“The public is therefore advised to disregard the video”, the Commission further stated while entreating the public to visit the EC District Offices to monitor the distribution process.

NDC has data on omitted names in register – Afriyie Ankrah