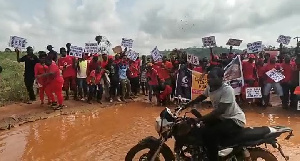 Residents of Manso Agoroyesum in the Ashanti Region have embarked on a demonstration over the deplorable nature of roads in the area.

The residents complain that the poor nature of the roads in the Amansie South District exposes residents to respiratory diseases.

According to them, the district is enriched with minerals, timber, and cocoa yet they cannot boast of any good road network.

They further stated that since President Nana Akufo-Addo took over management of the country from the Mahama administration in 2016, they are yet to have any meaningful development especially with road construction.

The Protesting residents explained that armed robbers are taking advantage of the deplorable nature of the road network to engage in their robbery activities.

The Youth leader, Appiah Gordon who presented the petition to the Amansie South District Assembly said the demonstration is geared towards calling the attention of the government to come to their aid.

“We are demonstrating basically to draw the attention of the government to the deplorable nature of our road and allow a constructor to come and fix our roads. The death rate on the road continues to increase due to robbery cases and this is giving undue pressure on the Police in the area,” he stated.

The Deputy Coordinating Director for the assembly, Mr. Augustine Sakyi who received the petition on behalf of the Assembly assured the demonstrators that their petition will be delivered to the District Chief Executive (DCE), Clement Opoku Gyamfi to act on.

He also commended them for the peaceful nature they conducted themselves during the demonstration which was devoid of distraction of properties.