Home / GENERAL NEWS / Russia-Ukraine war: How I walked for 12 hours to escape – Victim narrates her ordeal 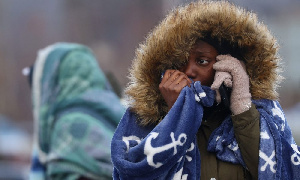 Russia-Ukraine war: How I walked for 12 hours to escape – Victim narrates her ordeal

An African who was refused a boarding pass to escape the escalating tensions following a war between Russia and Ukraine has revealed how she walked for 12 hours to escape to safety.

Jessica revealed that Police from Ukraine warded off persons of African descent from fleeing the country by buses provided to convey residents to Poland or Hungary.

“I was begging…the official looked me in the eyes and said Only Ukrainians that’s all. He said if you are black you should walk. I am currently in Debrecen Hungary. I got in at 10 am today, it wasn’t easy. On Friday I was on my way to Poland, I took a commercial taxi and the taxi could not stay in the line of cars. Literally, cars had been there for two days and when we dropped, google Maps was saying one hour walk. We walked and kept increasing. The term walk is traumatizing…I walked for 12 good hours and this is not an exaggeration. The traffic warden saw me and said I should go to the shelter to sleep. He said there is a bus coming from that shelter to the Polish border. When it was time to get on the bus, they said just Ukrainians. As a black person, I even lied I was pregnant they didn’t care. I was begging”, she revealed in an interview granted the BBC MyNewsGh.com monitored.

Meanwhile, the African Union (AU) says it is “disturbed” by reports that African nationals in Ukraine are been prevented from safely crossing the border to flee the raging conflict in the country.

In a statement late Monday, the pan-African body said: “all people have the right to cross international borders during the conflict, and as such, should enjoy the same rights to cross to safety from the conflict in Ukraine, notwithstanding their nationality or racial identity.”