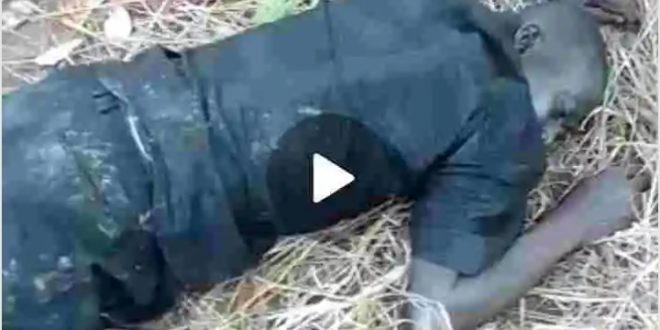 SAD VIDEO: Daniel, 50, Commits Suicide A Day After His Wife Died At Anhwere

The disheartening news reached Filasconews.com indicates that, Bra Daniel, a man believed to be in his 50s has committed suicide by drinking poison.

The sad incident happened at Anhwere, a town in Sunyani Municipality of the Bono Region on Tuesday morning, 20th September, 2022.

According to the report, the decease, Daniel, committed the act after death of his beloved wife, Sister Gifty, on Monday, 19 September, 2022.

Daniel after the sadden death of his wife on Monday vowed to take his own life through his wailing but the mourners took it lightly.

On Tuesday, early in the morning, he went to his newly acquired land situated at Anhwere with poison(weedicide) without the knowledge of anyone.

Unfortunately, he drunk the poison to join his late wife on the ancestors land.

His body was discovered later by the residents and informed the police.

As at the time of filing this report, Wednesday, September 21, 2022, at 7:25am, the two bodies(Daniel and his wife) are in Sunyani Government Hospital’s morgue for autopsy and preservation.

Previous VIDEO: How the missing nurse’s body was discovered, exhumed from the Mankessim Chief’s house
Next If you are suffering from these illnesses, eat Guava seeds