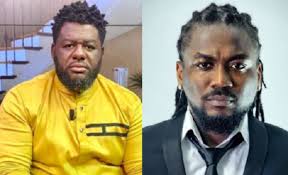 Samini placed in a ‘hot seat’ during UTV’s United Showbiz

There was an argument between Dancehall artiste Samini and artiste manager Bulldog after the former tried to dodge a question from the latter concerning hardships in the county.

During a discussion on UTV’s United Showbiz, Samini who made a guest appearance on the show was met with a question from Bulldog.

“Have you also experienced the ongoing hardship in the country?” Bulldog asked.

Bulldog posed that particular question on two occasions and in all instances, Samini did not give a straightforward answer.

Bulldog wanted an honest answer from Samini and also to make him realize that citizens are complaining of hardships under the government he (Samini) openly endorsed during the 2020 elections.

When Samini was first faced with the question that states whether he has taken note of the hardships the country, he replied saying;

“If every government comes to power, they try to do what they can and whiles they’re in power, citizens will have their various expectations of them. No government can state that it has been able to fulfil all the expectations of citizens. John Mahama came to power and I saw what he did. I’ve seen what Nana Addo Danquah Akufo-Addo has done so far. I’ve seen what he intends to do as well. so I’ve realized that not all policies that are often promised are implemented.”

Then Bulldog who seemed unsatisfied with Samini’s response said: “You still haven’t answered my question. I said the campaign you did, has it yielded fruitfulness?”

Samini again responded saying: “That’s for me, you and the citizens at large to deduce.”

It was in this light that Bulldog who was not content with Samini’s answer decided to burst out.

“He is dancing around the question and I don’t like that. Massa just go straightforward with the answer. Be honest!”

He said: “I’m not dancing around the question. If government assures citizens that they will fulfil some promises within a period of time and that time hasn’t ended, I think it is unfair to criticize them. So don’t ever ask me that question I don’t think I’m the right person to answer. I want to understand Bulldog because he hasn’t come clear with his question.”

After Samini’s response, Nana Ama Mcbrown interrupted and tried to calm the situation by asking Bulldog to frame his question well in order to get a better response from Samini.

Source: www.ghanaweb.com
Related Topics:BULLDOGCLASHSAMINI
Up Next

Wendy Shay graduates from the university with an HND