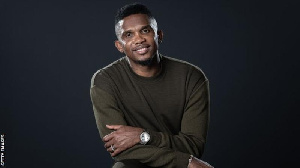 A Madrid court has declared African football legend Samuel Eto’o as the biological father of a 22-year-old Spanish woman.

The court, per reports by multiple European football outlets ruled on Thursday, February 17, 2021 that the ex-Barcelona and Real Madrid striker is the father of Erika Do Ro-sario Nieves.

The ruling by the court brings an end to a legal battle that started in 2018 at the behest of the mother of the woman who insisted that she had a sexual affair with Eto’o whiles he was on loan at Leganes.

Adileusa, the mother of Erica is reported to have encountered Eto’o in 1997 at night club in Madrid. Adileusa per court proceedings had a relationship with Eto’o, from which the daughter was produced.

Eto’o however denied the claims by the woman which compelled her to seek justice at the court with biological evidence.

The Cameroon Football Federation president is said not to have mounted any defence throughout the period and was not present when final judgement was announced.

Eto’o has been ordered by the court to pay allowance, totalling €1,400 (£1,167) per month dating back to when the case started.

Samuel Eto’o spent five years at Barcelona where he won the UEFA Champions between 2004 and 2005.

Eto’o also won the Champions League with Inter Milan and had spells at Chelsea and Everton.