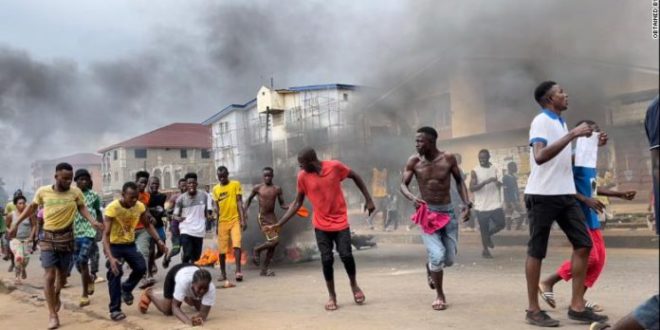 Seven soldiers were promoted and appointed to strategic positions in the army, including the positions of Assistant Chief of Defense Staff of the army and Chief of Staff at the Ministry of Defense.

The announcement comes shortly after the President gave a nationwide address in which he vowed to bring to justice all those who participated in Wednesday’s violent protest that claimed the lives of several people and left others injured.

The unknown organizers of the protest say they wanted to express dissatisfaction over the high cost of living in the country. They blame the administration for its failure to act to lessen the suffering of the masses.

But President Bio, in his statement, said the incident was nothing close to a protest against the cost of living, rather it was an attempt to forcefully effect a change in his government. He called it an insurrection sponsored by unnamed politicians, promising to mount a full investigation into the incident and bring all those found culpable to justice.

“The full force of the law will be brought to bear on all those persons who attacked and killed police officers. They, their sponsors, and their collaborators will not go unpunished,” he said in the address aired live on state broadcaster SLBC.

The President also said that a full investigation will be mounted into the death of ordinary citizens.

There has been no official death toll yet.

Preliminary report from the police, as of Thursday, cited only four deaths, all of them police officers.

Local media have been giving different figures for civilian deaths, with one putting it at 21.

Images shared on social media showed scenes in Freetown depicting a war zone. They showed destroyed and burnt down buildings, including police stations and public transport vehicles. It also showed the mutilated bodies of uniformed police officers who were attacked during the protests.

According to the police report, 10 police stations were attacked and either vandalized or burnt down. Some private properties of police officers were also destroyed, while two government buses, three government buildings, and a warehouse were burnt down.

As of Thursday evening, 113 demonstrators had been arrested.

The televised address was President Bio’s first public address to the nation after the protest. It came hours after images appeared on social media indicating his apparent return to the country.

The President was out of the country when the incident happened.

Far from announcing any change on that, President Bio warned of further “necessary security actions” to guarantee the peace and security of citizens. He said while these may cause some unavoidable inconveniences, the government’s actions will guarantee all constitutional rights and freedoms of peaceful citizens.

“But be assured that my government will crack down hard on violent insurrectionists, their collaborators, their sponsors, and their supporters,” he said, assuring that security forces will act with great restraint and within their professional codes of service.