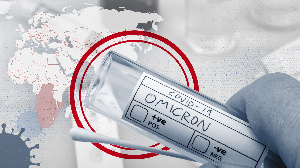 COVID-19 infection rates are soaring across South Africa as a result of the highly mutated Omicron variant of the coronavirus, but fewer people have died or required hospital treatment compared with previous waves of the disease, according to health officials.

South Africa on Wednesday recorded its highest number of cases since the spread of the pandemic, driven by the rapid spread of Omicron. However, Dr Michelle Groome, of the National Institute for Communicable Diseases (NICD), said on Friday that hospitalizations have not increased “at such a dramatic rate”.

“We are starting to see some increases, but relatively small increases in deaths,” she told a news conference.

Dr Wassila Jassat, also from the NICD, said the number of people requiring oxygen was “lower than what it was in comparison to any of the previous wave periods.”

“Patients do seem to stay for a shorter duration,” she said.

Health Minister Joe Phaahla said the data does not mean that Omicron is less virulent, but rather that vaccines are preventing serious illness.

“It’s probably due to significant vaccine coverage,” particularly among older people, he said.

About 31 percent of the population is fully vaccinated, but the number rises to 66 percent for people over the age of 60. Older people are most at risk of developing serious symptoms.

Scientists remain uncertain how dangerous Omicron is, but early data suggests it can be more resistant to vaccines and is more transmissible than the Delta variant.

Omicron was first identified in November by South African scientists.

The discovery of the new variant triggered an alarm that it could cause another surge in global infections, and led many countries to impose travel restrictions on the southern Africa region. South Africa led a chorus of condemnation against the “unjustified” and “counterproductive” travel bans, as scientists also expressed concerns the curbs would deter other countries from reporting the finding of new variants out of fear of facing similar restrictions.

Health ministers from the G7 of advanced economies on Thursday called for international cooperation in the face of Omicron, which they called the “biggest current threat to global public health”.