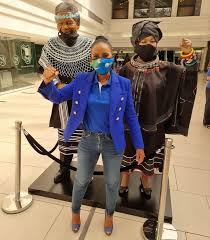 Mayor Mpho Phalatse becomes the first black woman to lead Johannesburg and the first woman since the end of apartheid. The last mayoress was elected in 1946.

The victory of the DA means that Nelson Mandela’s party, the African National Congress (ANC) loses control of the commercial hub for gold and diamond trade.

The DA could not outrightly win enough votes to get the top post but depended on coalition partners who were also against the ANC retaining the position.

The ANC’s electoral losses in the last few electoral cycles continued with the early November Municipal elections where they recorded a sub-50% total vote count.

For Jo’burg as the city is popularly known, Phalaste, a trained medical doctor, is the fourth person to occupy the mayor’s seat this year alone.

One occupant succumbed to COVID-19 whiles the other died in a road crash. The ANC’s Mpho Moerane, lost to Ms Phalatse by 121 votes to 144.