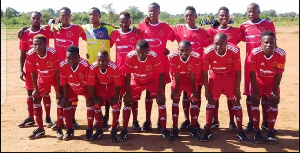 South African club banned for life for scoring 41 own goals

Just as Ghanaians continue to deal with the demotion of Ashantigold and Inter Allies after a player scored two own goals in their match-fixed game, a more shameful fixed-match scandal has happened in South Africa.

Two clubs, Matiyasi FC and Nsami Mighty Birds who play in the lower division in South Africa have been banned for life after playing a match of convenience which ended 59-1.

The said game according to a report filed by Soccer24 also produced 41 own goals in favour of Matiyasi FC who were chasing promotion to the ABC Motsepe League in South Africa.

Matiyasi were third in their stream and were three points behind the leaders, but were 18 goals behind on goal difference.

Matiyasi FC beat Nsami Mighty Birds 59-1, with forty-one of the goals scored as own-goals to balance the goal difference and they were caught for match manipulation.

According to FarPost.co.za, SAFA’s regional office in Limpopo summoned both clubs to a Disciplinary Committee hearing on 25 May 2022 in Giyani.

The teams were charged and found guilty of corruption and contravening the association’s statutes.

In the verdict, the clubs have been permanently banned from all football activities while the officials implicated from both clubs have also been given a five-year suspension within the region.

Watch the latest editions of Sports Debate and Sports Check below