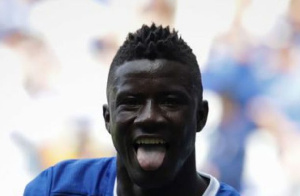 Ghanaian striker Samuel Obeng plies his trade for lower league Spanish side Real Oviedo and has been honoured by some ardent fans of the club.

The Ghanaian has had a baby named after him by a Spanish couple who are in awe of him and are also supporters of Real Oviedo.

In the local Ghanaian parlance people name their kids after persons they like or have been of immense help in times of need or trouble.

David Díaz and Silvia Barreiro, have decided to name their newborn son Samuel which is in honor of Ghanaian striker Samuel Obeng.

The baby boy is christened Samuel Díaz Barreiro and he is already a member of the Oviedo supporters club and has a  card: with his number being 21,450 and was discharged from hospital last Tuesday.

Samuel Obeng  is aware of what happened and in fact met the boy named after him thanks to a video call with the parents. “Very handsome, very pretty,” Obeng said of Samuel,

The former Black Meteor striker has scored 7 goals in 31 matches for his side with an assist.