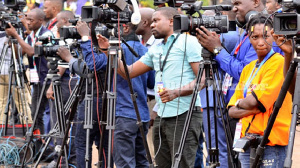 The National Sports Authority (NSA) are embroiled in a a bizarre “accreditation fight” with the Ghana Football Association over media licence for the 2022 FIFA World Cup qualifier between the Black Stars and Zimbabwe in Cape Coast on Saturday.

The NSA, who are the custodians of the state facilities in the country have warned journalists who secure accreditation tags without the logo and official stamp of the authority.

The latest directive is in sharp contrast to an accreditation process opened by the GFA for the same fixture at the Cape Coast stadium.

The NSA has issued a strong warning in what appears as a direct attack on the decision by the GFA to issue accreditation.

“The National Sports Authority (NSA) is cautioning the general public on the need to obtain an NSA approved tickets to be deployed into our stadium. The security agency to be deployed on that day, will not accept any tickets or accreditation tags without NSA’s logo and/or official stamp,” part of a strongly worded statement signed by Public Relations Officer Charles Obeng Amofah read.

The Black Stars will commence training on Tuesday ahead of their 2022 FIFA World Cup qualifying match against Zimbabwe on Saturday.

According to the Ghana Football Association(GFA), 27 out of the 32 invited players are expected in the team’s camp.

The team is expected to travel to Cape Coast Tuesday afternoon – where they will train in the evening.

Meanwhile, England based right-back Andrew Kyereh Yiadom who plays for Reading FC is currently being assessed after picking up a knock on Saturday during a Championship game against Cardiff City.

Ghana is scheduled to play the Warriors of Zimbabwe in a doubleheader with the 1st leg set for the Cape Coast Stadium on Saturday, October 9, 2021.

Source: ghanasoccernet.com
Related Topics:NSA
Up Next