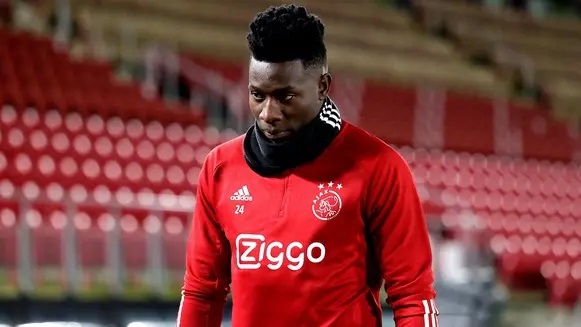 Ajax goalkeeper Andre Onana has been suspended for 12 months by UEFA due to a doping violation, the Eredivisie club have confirmed.

Ajax and Onana will appeal to the Court of Arbitration for Sport (CAS) to overturn the ban, imposed after an out-of-competition test in October 2020 found the substance Furosemide in the player’s urine.

The club said the test result was due to Onana, 24, mistakenly taking Lasimac – a drug prescribed to his wife – when he felt unwell.

UEFA therefore accepted Onana “had no intention of cheating”, an Ajax statement read.

It added: “However, UEFA believes, on the basis of the applicable anti-doping rules, that an athlete has a duty at all times to ensure that no banned substances enter the body.”

The suspension is effective from Friday and applies to “all football activities, both national and international”.

“This is a terrible setback, for Andre himself but certainly also for us as a club. Andre is a top goalkeeper, who has proven his worth for Ajax for years and is very popular with the fans.

“We had hoped for a conditional suspension or for a suspension much shorter than these 12 months, because it was arguably not intended to strengthen his body and thus improve his performance.”

Cameroon international Onana has been a key man for Ajax since his debut in 2016-17, playing his part in runs to the Europa League final and Champions League semi-finals.

His absence is the latest blow to Ajax, who earlier confirmed they would be unable to correct the administrative error that saw Sebastian Haller left out of their Europa League squad.

Haller, signed from West Ham for a club-record €22.5million last month, was not included in Ajax’s initial list for European competition for the second half of the season.

Coach Erik ten Haag described the mistake as “an administrative error with major consequences” and “an incredible setback” for the player, although he confirmed Ajax would be addressing the matter with UEFA.

However, a further club statement has now confirmed UEFA sent “a final message” to say Haller could not be added to the group.

Haller has scored two goals in his first seven games for Ajax in all competitions.

Medeama SC in trouble after beating Hearts of Oak