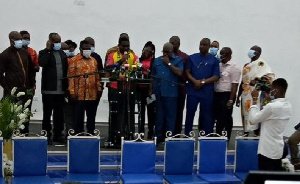 During in an event at the Sports Hotel in Kumasi, Kotoko’s recently-constituted board named the former Phar Rangers boss as the man who will be overseeing the implementation of their policies.

Kotoko have been searching for a CEO since relieving George Amoako of his duties.

Nana Yaw has been given three years to turn around the fortunes of Kotoko and send them back to the summit of Africa football.

His immediate duty will be to see the completion of the Adako Jachie project which has stalled for years.

He will be leading the club’s digitization agenda which includes the registration of Kotoko supporters and using the numbers to stake claim for sponsorships.

Speaking at his unveiling, Nana Yaw promised to ensure that Kotoko consistently qualify for the FIFA World Club Championship.

To achieve that feat Kotoko will have to win the CAF Champions League which has eluded them for decades.

Since their Confederations Cup final with Hearts of Oak in 2005, Kotoko like their rivals are yet to compete in the final of any continental competitions.

Nana Yaw Amponsah’s arrival is seen as a watershed moment in the bid to return Asanteman’s pride to the top.