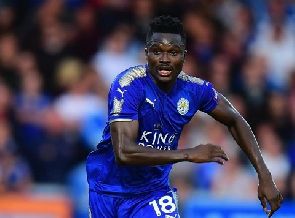 Injured Black Stars centre-back, Daniel Amartey could be a doubt for the Africa Cup of Nations (AFCON) slated for Egypt in June with Leicester City manager, Brendan Rodgers, confirming his recuperation has been slower than expected.

Amartey sustained a horrific injury on his ankle during their premier league 1-1 home draw game against West Ham United last October, which has sidelined him for about six months now.

He subsequently underwent successful surgery after the injury and was billed to return in March, but the Leicester manager has confirmed that the season was over for the Leicester City defender.

“I’m unsure if he’ll be with us before the end of the season,” said Rodgers. “He is working hard, but we don’t have a timeline on that yet.”

Amartey joined the Foxes from Danish giants FC Copenhagen during the 2016 winter transfer window where he signed a five-year deal.

The player, whose season started on a flying note, got injured along the line and was ruled out for the most part of the season.

With the AFCON set to start in about two months, Ghana coach Kwasi Appiah will have to overlook the 24-year-old who is still recovering from the injury.