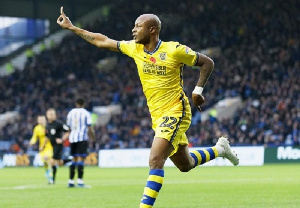 Ghana captain Andre Ayew continued his commendable form this season for Swansea City FC as he provided an assist in his side’s exciting 4-4 draw away at Hull City in the English Championship.

The Friday Night fixture served a fascinating 8 goal thriller at the KCOM Stadium.

With the scores at 3-2, advantage Hull City, Andre Ayew provided a moment of brilliance to get Swansea back into the game.

The 30 year old put in a brilliant work by beating his marker, making an amazing run to the byline and firing in an inviting low cross. Second half substitute, Jordon Garrick gleefully accepted the invitation and finished first time to score his first league goal for Swansea.

This was Ayew’s 5th assist of the season and took his overall goal involvement this season to 15 in 31 matches in the Championship.

Swansea took a 4-3 lead subsequently through on-loan Liverpool youngster Ryan Brewster but failed to hold on as they conceded an injury time equalizer.

The Swans currently lie 9th on the table on 48 points (5 points behind the last layoff spot).

Related Topics:ANDRE AYEW
Up Next