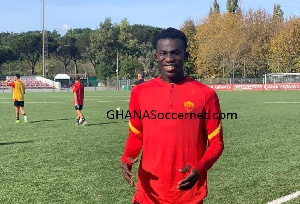 Italian Serie A giants are set to announce a deal for a teenage sensation from Ghana Felix Ohene Afena Gyan as a first-team player in what will be a groundbreaking transfer, GHANASoccernet.com can exclusively report.

The deal, brokered by renowned agent Oliver Arthur, will be the first time a player without international exposure is being moved from a Ghanaian side as a senior squad member of a Top 4 club in the peninsula.

His transfer will be a huge endorsement for young Ghanaian talents who are often signed by stellar European sides and placed in their youth set-ups or loaned out to feeder clubs or lower-division sides for playing experience.

Gyan will become the third winter signing for the Giallorossi after the re-signing of Stephan El Shaarawy and Bryan Reynolds from FC Dallas.

GHANASoccernet.com understands, the 18-year-old prospect will fill one of the two non-EU slots alongside Reynolds, who is a US youth international.

”The story of Felix is simply amazing. He went on a trial and the club felt he has the qualities for top-tier football and like him so AS Roma want to sign,” a source close to the player told GHANASoccernet.com

Gyan is reported to have attracted interest from AC Milan and Sassuolo but AS Roma have big plans to make him part of Paulo Fonseca’s squad.

He is strong, quick, skilful and has a high conversion rate as a forward.

Roma are currently fourth in the Serie A after 19 matches.

Related Topics:AS ROMA
Up Next