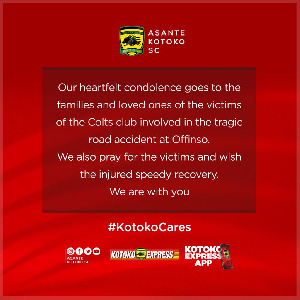 Asante Kotoko have sent a condolence message to mourn the death of eight young footballers in Offinso, Ashanti Region on Saturday evening.

According to eyewitness reports, the front tire of the mini bus carrying the over 30 kids of a colts team blasted on the Offin Bridge and as such veered off into the Offin River.

The lifeless bodies were recovered from the river as people in the nearby towns rushed to the scene to offer their help.

Six died on the spot and two later died at the Komfo Anokye Teaching Hospital.

Twenty-four (24) other kids are also receiving treatment at the St. Patrick Hospital in Offinso following the accident.

The news has thrown the entire football fraternity in Ghana into a deep state of mourning.

Some reports say the Offinso-based team were returning home after travelling to Afrancho- a suburb in Kumasi-to register players for the upcoming season.

Others claim they had gone to play in a football tournament.