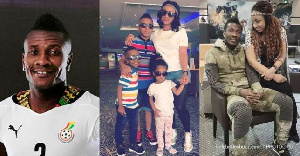 Sometime last year Ghana’s celebrated Asamoah Gyan ‘broke’ the internet when he demanded a DNA test to ascertain if he is the true and biological father of the three children he has with his estranged wife.

The former Black Stars captain and the country’s all-time top scorer was alleged to have denied fathering their three children and demanded a DNA test be carried out on all three to ascertain if he is the father of the children. The footballer was bent on annulling his marriage to his wife, Gifty Gyan.

Asamoah Gyan led his two brothers to storm the hospital in a dramatic fashion.

Below is the full story of what ensued

On Wednesday February 13, 2019 results of a DNA test conducted on January 16, 2019 at Medilab at Roman Ridge in Accra to ascertain the true paternity of three children of embattled Black Stars Skipper, Asamoah Gyan was finally known after weeks of anxious waiting.

MyNewsGh.com which has been following the story brings to its readers details of how things unfolded at the facility where samples of five individuals were taken in the presence of their lawyers based on Accra High Court Directive.

First to arrive at the facility at about 8:45am were Gifty Gyan, the three children and lawyers from Kulendi Law Firm who are the defense counsel.

Asamoah Gyan dressed in a cream colour track suit upon arrival, was ushered into the sample taking room together with his two brothers bumping into the wife and his three children who were already seated and waiting.

As the process started, he tried initiating a chat with the children who ignored him and were focused on their mother but he persisted and spoke to the younger son to find out how he was faring in a much tensed atmosphere.

A move to speak to Gifty Gyan was obstructed by Baffour Gyan before the moment for the sample taking came which was done in the presence of lawyers for both parties and at about 11:55am had been concluded.

A German logistics company, Deutsche Post DHL currier vehicle was immediately called in and conveyed the DNA samples from the Gyans- Asamoah Gyan, Gifty Gyan and the three children (Frederick Gyan, Raphael Gyan and Ohemaa Gyan) headed for the airport to one of top-most reliable Diagnostic Laboratory in India.

Both left the premises at about half past midday with the children ignoring Asamoah Gyan even as he stood on the corridor of the facility while they passed by with their mother raising suspicion all was not well even before he pressed alarm bells on suspicion of the true paternity of the kids.

On Wednesday the test results conducted revealed all the three kids were the Gyans.

Asamoah Gyan in addition to the DNA, MyNewsGh.com gathered, was pushing for the annulment of the marriage to Gifty Gyan which was a leeway for him to escape paying huge compensation to mother of his three children on grounds the marriage technically never existed.

But the lady MyNewsGh.com understands, is pushing for a divorce insisting it was a legal marriage under the laws of the country in order for the footballer to bear the brunt of his actions after subjecting her to international disgrace which sought to suggest she was sleeping around.

Related Topics:ASAMOAH GYAN
Up Next

Nketiah, Saka and England wonderkids who could play for African teams