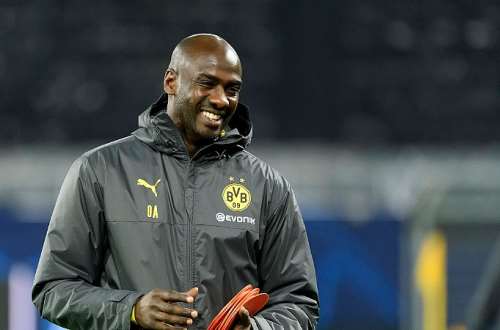 The Ghana Football Association has contacted Borussia Dortmund trainer Otto Addo to take over the role as Black Stars coach following the exit of Charles Kwablan Akonnor on Monday.

The country’s football governing body has instituted a three-member committee to settle on a new gaffer in the next 72-hours.

Otto Addo, who currently works at Bundesliga outfit Borussia Dortmund, has popped up as a frontrunner for the coaching role at four-time Africa Cup of Nations champions.

The German-born Ghanaian international started his coaching career with his former club Hamburger SV in 2009, in the process serving as a youth team coach and an assistant manager till 2015.

Eight years ago, Addo was appointed as the head scout of the Ghana national football team and prior to the 2014 FIFA World Cup and 2015 Africa Cup of Nations.

Addo was appointed by his former club Borussia Dortmund to work as a ‘talent coach’ in 2019, having previously held a similar role at Borussia Mönchengladbach.

He was promoted to serve as first-team assistant coach to Edin Terzić who had been promoted to interim head coach, following the sacking of head coach Lucien Favre.

Addo was a member of the Black Stars squad that represented Ghana at the country’s first-ever FIFA World Cup in 2006.

He managed to score twice in his 15 game outings for the Black Stars of Ghana.