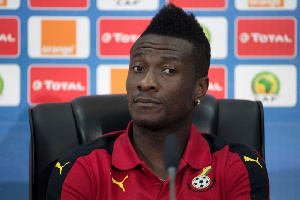 Social media users have turned the heat on former Black Stars striker Asamoah Gyan and his brother Baffour Gyan after they allegedly assaulted a tennis player.

Asamoah and Baffour have been accused by the CEO Websoft Solutions, Godwin Martey for attacking him during a tennis match at the 37 Army Officer’s Mess tennis court.

Narrating his ordeal at the hands of the Gyan brothers to Joy FM, Godwin Mortey said that during a tennis match, he raised questions about unfair decisions by the umpire who happened to be Baffour Gyan.

This infuriated Baffour who hurled expletives at him and attacked him.

“Most of these controversial points that were in my favour, Baffour Gyan was giving the point to Asamoah Gyan. At a point I became a bit uncomfortable with it. So, there was a particular point that to me was obvious that the ball was good, and Baffour Gyan insisted that it the point was for Asamoah Gyan”.

“Baffour Gyan shouted at me with aggressive tone saying that my friend shut up and stand there and play”.

Mortey said he quit the game and asked for it to be rearranged but Baffour kept abusing him verbally and subsequently punched him.

“Then he came down and came to hit me that ‘my friend go there, I say go and play’. He was hitting me to go and play,” he added.

“As he was hitting me, Asamoah Gyan came in support of what Baffour was doing – assaulting me.”

Godwin Mortey said that he has already lodged a complaint at the Cantonment Police Station and will sue the two brothers.

“I’m suing big time. I’m going to sue…The fact that Baffour threw a challenge to me that I can go to any court, any police station, they can’t do anything, that actually gave me more adrenaline to prove to them that the police force is still a good force.

“I will sue tortuous liability on civil case and I will press for the police to also prosecute them criminally. I will fight this to my last blood.” On social media, some Ghanaians are blasting the two legends for being violent and attacking an innocent man.

Below are some of the social media posts