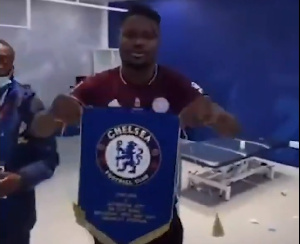 Despite not being on the bench, Amartey was handed a yellow card after a near-brawl with Chelsea players.

The row was triggered by a hard challenge from Leicester’s Ricardo Pereira on Chelsea left back Ben Chilwell.

The situation appeared to have been brought under control until Thiago Silva spotted Amartey and charged towards him. An angry Amartey reacted and had to be pushed into the stands by some members of the Leicester technical team.

The anger of the Chelsea players it is believed stems from a viral video of Amartey flinging a Chelsea pennant after Leicester’s FA Cup final victory on Saturday.

Speaking after the game, German defender Antonio Rudiger revealed how Amartey’s pennant throw served as a motivation for the Chelsea players.

“Some people from them gave us a bit more motivation from Saturday. Congratulations to them, they won and everything. Celebrate and everything but don’t disrespect club history. This is a bit bigger than you.”

Leicester City have meanwhile apologized to Chelsea over the incident and the London club have also accepted the apology.

On social media, Chelsea fans and Ghanaian followers of the English Premier League have been commenting on the incident.

Amartey has been up in the trends all night with a flurry of tweets about the latest incident.

Solanke and Ayew: How forwards’ finishing could define playoff semis