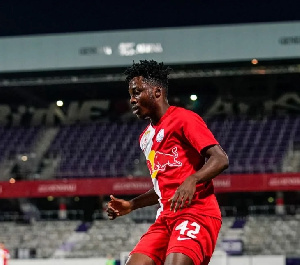 Youngster Daniel Owusu scored just one minute after coming on as a substitute for Red Bull Salzburg in their 3-0 win over Wolfsburg in the UEFA Youth League.

The 18-year-old replaced Federico Crescenti in the 80th minute and after 60 seconds he connected in at the far post to make it 2-0.

Owusu recently recovered from a knee injury which sidelined him for weeks.

Last week, he played for Red Bull Akademie in their 3-0 win over Tirol U18 in the Jugendliga.

He is on loan at FC Liefering in the Austrian second-tier but registered to play for Salzburg in the UEFA Youth League.

Two minutes from time, Till Meier scored an own to condemn the German side.

Salzburg opened the scoring on 37 minutes through Justin Omoregie.

Ghana moves up to 52nd place in FIFA Ranking for September