The failed prophecies by founder of the Glorious Wave Chapel International has become a subject of concern for some persons, with sports personalities now shying away from his prophetic predictions.

Joseph Paul Amoah, a member of Ghana’s athletic team for the 2020 Olympic Games has issued a plea to Prophet Badu Kobi, urging him not to jinx the country’s performance with one of his prophecies.

In a tweet posted on Monday, July 12, 2021, Joe Paul as he is widely known said “Badu Kobi please do not make any prophecy about the Ghana Olympic team. I beg you!”.

It comes on the back of a series ‘false prophecies’ from Prophet Badu Kobi who over the weekend became the butt of social media jokes.

Badu Kobi in separate prophecies, predicted wins for Brazil and England in the finals of the Copa America and Euros respectively.

In the case of Brazil, he said “Most people don’t know this and they question, how a prophet is able to talk about football, health matters, energy, future matters but let me tell you that… God rules in men’s matters. There is nothing that you can say that God is not interested in.”

On England, Badu Kobi said: “Today, England will beat Italy. I will say it again. That is the work of a prophet. Keep saying what God is saying.”

As it turned out, Argentina and Italy are champions of the Copa America and Euros respectively.

Joe Paul is one of Ghana’s medal hopefuls with expectations high that he and his colleagues will make Ghana proud in the men’s 4×100 relays.

To enhance his chances of performing at the Olympic Games, Joe Paul will not compete in the 100 metre race in order to focus on the 200 metre race which is his specialty. 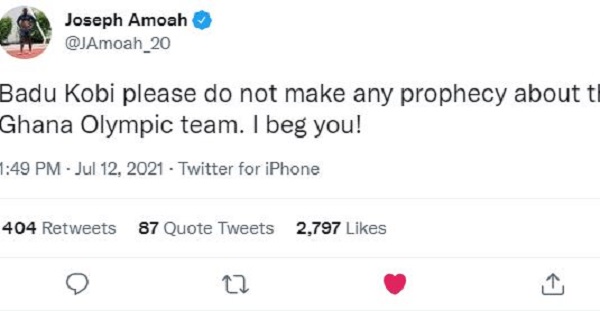 Source: www.ghanaweb.com
Related Topics:AthleteGHANAOLYMPICS
Up Next

US$5million bribery allegation against Chief Justice: What we know so far