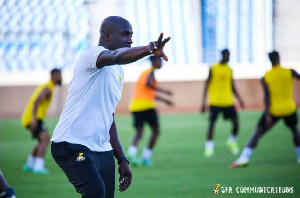 The former Ghana international was spotted in Black Stars‘ first training session at the Cape Coast stadium ahead of the crucial World Cup qualifiers against Zimbabwe.

Otto Addo is said to have led an ‘exciting training’ as 25 players were taken through several routines to get them ready for Saturday.

However, Addo has not quit a similar role he has at Dortmund and is combining both jobs.

“What I know is that Otto will be working as a service provider at least for now, unfortunately, because having sought permission from his club, Borussia Dortmund, they felt they cannot release him,” GFA spokesperson Henry Asante Twum revealed.

“It will take time for him to come and work for us fully. So for now Otto will be doing pay-as-you-go. He comes to work during the international breaks and then goes back.”

He will be in the dugout on Saturday when the Black Stars host Zimbabwe in a must-win encounter at the Cape Coast Stadium. Three days later, the two teams will meet again in Harare.

Ghana needs to win both games to stay in contention for qualification to Qatar.