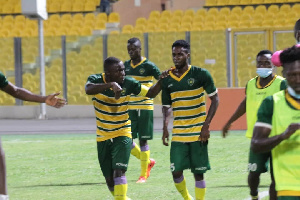 Fans of Ebusua Dwarfs have reportedly resolved to seek redress at the law court over a ruling by the Disciplinary Committee of the Ghana Football Association, Asempa FM reports.

Dwarfs were declared losers of a Week 23 Ghana Premier League fixture after their fans prevented the referees from entering the pitch in the second half.

The ruling by the Disciplinary Committee of the GFA stated that Dwarfs were going to lose three points and fined GH¢5000.

Excerpts of the GFA rulings read: “that having been found to have forfeited the match, Ebusua Dwarfs FC shall be considered as having lost the match in accordance with Articles 33(2) and 34(12)of the GFA Premier League regulations and accordingly, three points and three (3) goals are hereby awarded in favour of Legon Cities FC.

“That in addition, being the defaulting club, Ebusua Dwarfs FC shall lose three (3) points from the club’s accumulated points from their previous matches pursuant to Article 33(5)(a) of the GFA Premier League Regulations.

“That in addition, being the defaulting club, Ebusua Dwarfs FC is hereby fined Five Thousand Ghana Cedis (GH¢5000.00) payable to the GFA, 50% of which shall be paid to Legon Cities FC pursuant to Article 33(5)(b) of the GFA Premier League Regulations.”

The decision has infuriated the fans who according to Asempa FM held a meeting last night to decide on the way forward.

The reports states that the fans will in the coming days file a suit and seek an injunction on the Ghana Premier League.

Meanwhile, management of Ebusua Dwarfs have appealed the decision by the Disciplinary Committee.

Source: www.ghanaweb.com
Related Topics:Dwarfs
Up Next