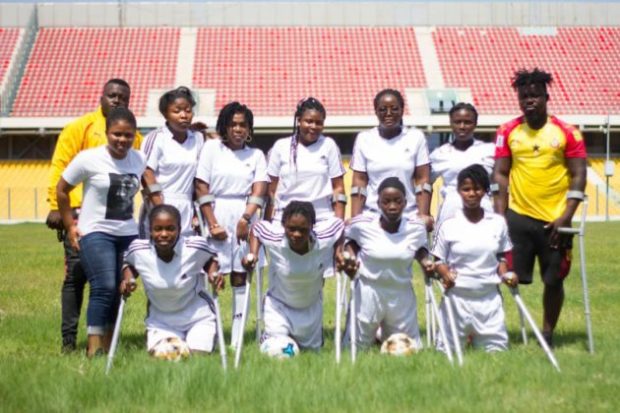 A new female amputee football team has been formed by Ernestay Disability and Sports Foundation, a Non-Governmental Organisation, making it the first-ever in Ghana.

At a colourful ceremony in Accra, the team, made up of young lady players and goalkeepers, was outdoored by Madam Amanorbea Dodoo, Programmes Officer of the National Council on Persons with Disability.

She encouraged the ladies to make a mark in their chosen field of sporting discipline to be the envy of their male counterparts.

“Tell the men that we are coming, we have come and we have come to stay,” Madam Dodoo noted as she declares the team officially launched.

Ernestay Disability and Sports Foundation was founded by Ernest Yaw Ayisi, a former member of the National Amputee Football team, a Paracyclist, who has participated in several competitions in the United States, United Kingdom, and other European countries.

Speaking at the event, Mr Ayisi said the reason for the gathering of the ladies is to empower them to bring out their talents and to prove to their male counterparts that they are as capable as the former are.

“We believe in developing the talents of Persons with Disability (PWDs) in sports and other fields of human activities as we all contribute to the betterment of the nation. We are putting in place measures to ensure these ladies come out as the best in Ghana, Africa and the world,” he said.