struc Ghana vs. South Africa: 'We will play to win' - Richard Ofori - Home Of Ghana News 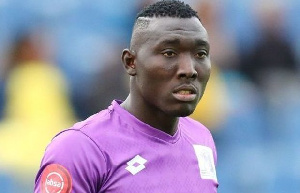 Ghana’s first-choice goalkeeper, Richard Oforihas underscored the importance of the game against South Africa on Monday and says the team will play to win.

The Black Stars will tomorrow play as guests to the Bafana Bafana in a Group G encounter of the qualifiers to the 2022 FIFA World Cup.

Ahead of the crucial meeting tomorrow, goalkeeper Richard Ofori at a press conference today has said it will not be an easy match.

However, the goalkeeper says the Black Starswill fight to win for the nation to enhance the team’s chances of qualifying for the global tournament.

“That’s the stage that every player wants to play so its very import to the team and the nation,” Richard Ofori shared.

The Ghana goalkeeper continues, “Most of the players I am playing with them here [In South Africa] and I know their quality is very good. But at the end of the day, we are Ghana so we need to show this is the Ghana national team and then the most important thing is we need to win.”

Tomorrow’s game will be played at the FNB Stadium in Johannesburg. It is scheduled to kick-off at 16:00GMT.