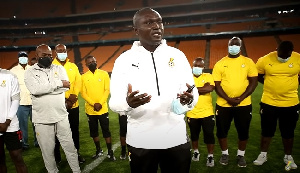 • The Black Stars won their first game against Ethiopia

Ghana’s High Commissioner to South Africa, George Ayisi-Boateng has spurred the Black Stars to deliver victory as they come up against hosts South Africa in the 2022 World Cup Qualifiers on Monday.

The Black Stars began their World Cup qualifying campaign on a good note with a 1-0 victory over Ethiopia on Friday.

The team led by coach Charles Akonnnor are bent on winning their game against the Bafana Bafana.

Speaking to the team when he paid them a visit at their training grounds, George Ayisi-Boateng urged the Black Stars to continue their fine start in the qualifiers by beating the South Africans.

According to him, the restriction on stadium attendance is a major advantage the Black Stars must capitalize on to defeat their opponents.

“Our expectations are that you are going to continue from where you started. Unfortunately, we couldn’t get many people to come and support you because of the COVID-19 restrictions but that is also an opportunity because they are also not going to have any home advantage, that’s the South Africans to support their team. It’s a no man’s land,” Charlse Asuoko Oweredu said.

Adding: “I think that we should be able to do better and at least win this match. Once we do it, then the next subsequent matches would be easy for us,” the High Commissioner stated.

According to him, all necessary things have been put in place to ensure that the Black Stars earn a resounding victory over the South Africans, “I wish you well and hopefully victory will be for us.”

Ghana vs. South Africa: ‘We will play to win’ – Richard Ofori