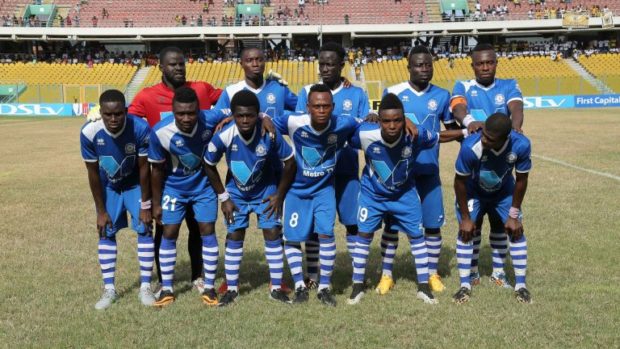 The ‘Dade Boys’ recorded yet another victory over the Kumasi-based outfit, having between them with a 4-3 scoreline a year ago.

Gladson Awako was missing from action through suspension having picked up his third yellow card of the season in the 2-0 triumph over noisy neighbors Accra Hearts of Oak.

However, Charles Danso Otu, Samuel Ashie-Quaye and Michael Yeboah were on hand to ensure Yaw Preko and his boys ended their three-game winless streak at home, beating Andy Sinason’s side by three goals to one.

Danso opened the scoring in the 34th minute mark, finishing off neatly from a promising build up. King Faisal’s attempt to get back into the game after the recess was dashed when Ashie Quaye stepped forward to double Olympics lead.

Frimpong Boateng pulled one back for the Babes but it only proved to be a consolation goal as Yeboah restored Olympics’ two-goal advantage in the 81st minute.

The away side were also looking to record back-to-back wins for the first time this season following the dramatic victory over Berekum Chelsea over the weekend.