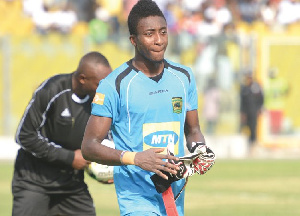 Black Stars goalkeeper, Felix Annan has reiterated that he will definitely return to giants Asante Kotoko before he will hang up his boots.

The 26-year-old recently parted company with the Porcupine Warriors after 10 years of service ahead of the 2021/22 Ghana Premier League season.

The goalkeeper joined Kotoko as a teenager in 2011 from Gomoa Fetteh Feyenoord and rose through the ranks to become the club’s number one shot-stopper.

However, in the past two seasons, he has lost his position. Last season, he was the club’s third-best choice falling behind Razak Abalora and Kwame Baah respectively.

In the quest to get much playing time next season, he has severed ties with the two-time African champions.

In an interview with Kumasi-based Kessben FM, Annan indicated that he will return in any capacity to serve the club again.

“I will thank the fans of the club, the CEO, Nana Yaw Amponsah and his management and the Board of Directors and the technical team and the players at least they’ve all contributed to my career and I am grateful.”

“I just want to wish the team all the best but they have to know always there is Felix Annansomewhere to support the team, definitely one day I will be back in the team in any capacity at all,” he said.

Former Black Stars player reveals frustration made him an alcoholic, slept with over 400 ladies