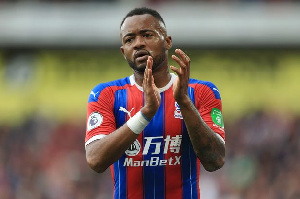 It is the hope of Crystal Palace forward Andre Ayew that the club participates in an European competition in the next few years.

In an interview with the club’s media, the Ghanaian striker disclosed his ambition for the club which is to see them play either in the Europa or Champions League.

Jordan stressed that he wants to excel for the Eagles and help them achieve European football.

“For Palace, I just hope that we manage to be in the top 10 and one day be in Europe. That’s my wish for Palace and for me personally.

“As players we all want to have great seasons and play in the best competitions, so that is my hope and my wish for Palace,” he added.

Jordan joined Palace three years ago from Swansea City and was instrumental in helping them avoid relegation.

Last season, he emerged their best player and top goalscorer for the club.

His form has however regressed with just one goal scored in the Premier League this season.

Jordan Ayew has made more than 85 appearances for Crystal Palace since joining in 2018.