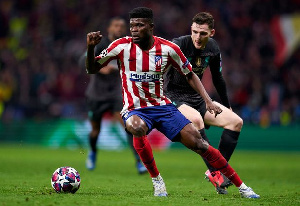 Partey is believed to be Arsenal’s manager Mikel Arteta’s number one target as he prioritizes signing a new defensive midfielder ahead of 2020/21 season.

He has made 36 appearances in all competitions for Atletico, scored three goals and provided one assist in the campaign.

His contract with the La Liga side is set to expire in 2023, however, the club is keen on extending Partey’s contract until 2025 which comes with a larger release clause than the current one.

The Ghana international came through the club’s academy after moving to Spain at the age of 18.

Manchester United and Chelsea are among the clubs looking to bring him to England due to his scintillating performance.

However, the GFA capo sharing his thought as to whether the Ghanaian midfield gem should accept a move to Arsenal in England as they are keen to acquire his services for the upcoming campaign encouraged him to make a decision that will not affect his career in the future.

He entreated him to consider three main important things before he will consider making a move to Arsenal.

“First and foremost, Partey has done creditably well after coming from the lower ranks to the top. He’s done well for Atletico Madrid and the Black Stars. Now going into his next level, I think he needs to consider three main factors that is, football, financial and family factors”

“So I will advise him to look at these three key areas properly before making a decision. At the end of the day, Atletico is a big club and so the variables are not too different” he told German based Topical Radio.

EPL to resume on June 17