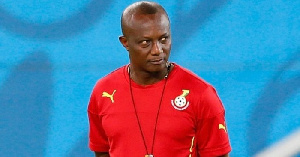 Ex-Ghana coach Kwasi Appiah has refuted claims that he held talks with Sudanese giants Al Hilal prior to the end of his second stint as Black Star coach.

Reports went rife in the Ghanaian media that the 2014 World Cup Ghana coach had commenced negotiations with the Sudanese giants to become their new head coach.

However the 60-year old gaffer has swiftly debunked the reports, stating they are untrue hence should be ignored.

“Reports that I am in talks with Hilal to become their coach is not true, Hilal have not even spoken to me about their intention so I don’t know where that news is coming from,” he told Sportsworldghana.com

“I’m currently on a business trip to Dubai and not for football reasons,” Appiah added.

Appiah recently launched his book “Leaders don’t Yell”, a biography that has opened up a lot of issues during his time as a footballer and coach of the senior national team.

Related Topics:AKWASI APPIAH
Up Next